skip to main | skip to sidebar

Sorry for the delay folks, I've been a bit busy moving, getting a new computer, Christmas holidays, hard drive at work frying out leaving me to frantically replace about five years worth of my teaching stuff...

You know, the usual smooth ride.
I'll be getting back to the regular programming here soon, I'm working on the next post right now, so hang tight, and read the Illusion of Life while you wait. If that doesn't suit your fancy, just pick up a Mad magazine from the 80's and search through it for some Mort Drucker drawings. If those don't blow your mind, you might be missing the point of this whole drawing thing.
(thanks for asking Naoki.)
Posted by pencilpusher at 1:28 AM 1 comment:

Compare these two poses and very quickly you will find that one is much stronger and more natural than the other. 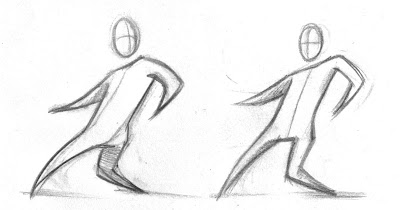 On the surface, the two poses are almost identical. They have the same basic silhouette, the same centre of balance, same structure, model, anatomy, line quality... and yet, one feels loose, natural and dynamic, and the other feels almost painfully flat and awkward.

The single difference between the two poses is the twist through the body, but that one change has altered the line of action, the balance, eye direction, attitude, depth of the pose, the movement... It's changed almost every component of the pose, and taken it from a flat, awkward, static pose into a three dimensional, dynamic pose full of attitude and movement.

It's that difference that allows us to see this pose as something we can relate to and empathize with, and without that empathy, we could care less about the character.

Here's a few more poses with an obvious, dramatic twist to illustrate the point.

There is an obvious movement to poses that are this broad, and without that twist, the amount of movement, and our interest in the pose would fade. However, the twist doesn't have to be that obvious to be of any use. Here's a few more poses with a little more subtlety, but still have the depth and movement in them that a twist can provide.

Ultimately we are using this incredibly effective little trick to keep our poses looking natural and believable. If we allow our drawings to become flat and awkward, the audience begins to see them as just drawings, and not characters at all. We want people to subconsciously feel themselves in these poses, so they can believe in the character's actions and reactions. The minute we fail to convince our audience that this is a real, living breathing character, we've failed to accomplish our goal. 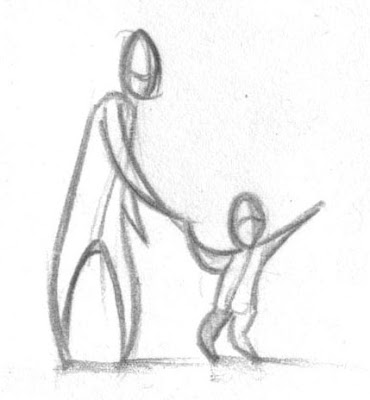 Posted by pencilpusher at 1:45 AM 3 comments:

One of the key components to creating a strong pose is the use of weight and balance.

In this simple pose, it is easy to see that the character is on balance.

His feet are firmly planted, his body mass is positioned directly over the feet, and as a result he looks well balanced and natural. It's a bit of a boring pose though. So what happens if we make it a bit more interesting? If I decide to add a bit of curve to his line of action by moving parts of his body one direction or another, the weight of the character is going to begin to shift. When it does, I have to be aware of exactly where the centre of balance is, so I can keep the weight equalized, and keep the pose in balance.

For the time being, I'm going to keep an equal amount of weight on each foot, so the centre of balance will lie directly between the feet, centred under the character's torso. As a result, if I shift one part of the character to the right, I need to shift another part to the left to counter balance it, or the character will start to look uncomfortable. Think of the body as a complicated teeter totter. Ten pounds of ass cheeks to the left? Then we need ten pounds of biceps to the right.

In these examples you can see that every time I shift the hips in one direction, I'm going to shift the shoulders in the other direction to keep the body mass centred between the feet. 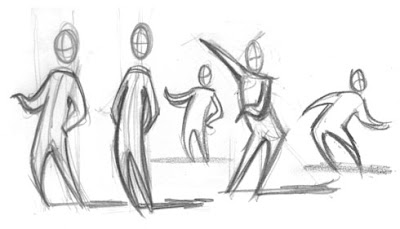 If I don't, I get poses that look like this:

They still have a clear line of action, but there is obviously something drastically wrong here.

As I start to get more dynamic movement in the character, the poses get more and more pushed to one side or another, and the weight shifts until it is being supported almost exclusively by just one of the legs. This creates a new centre of gravity focussed below the leg holding the weight, and we have to begin balancing above one point, rather than keeping everything centred between two points.

The more we centre the balance over one foot, the more weight it supports. Which, in turn, means the other foot is supporting less and less, and when enough weight has been removed, it can lift, because it is no longer needed to support the body and you start to see poses like this.

Now think about a character interacting with an object. Let's say something simple, like a box. Take a look at these poses and see if you can make a judgement about what each box weighs.

In the first pose, the character holds the box out from his body, far to the left of his centre of gravity, and seems pretty comfortable doing so. Without any movement of the body to counter balance weight from the box, we can only assume the box is very light, and it's weight isn't enough to affect the character's pose in any way. However, with just a small shift in balance in pose 2, the box immediately takes on some weight. As I work my way through the poses I am shifting the weight closer and closer to the centre of gravity, and using the body weight to counter balance it. By the time I reach poses 5 and 6, the box has shifted entirely into the centre, and you can feel it getting heavier and heavier.

Just by having a character interact with the box, we are manipulating people into believing it actually contains something. But it doesn't. To be perfectly honest... it's not even a box. It's just a few lines on a piece of paper, and there is no real weight to it at all. I'm just taking advantage of your empathy. I'll explain...

If you draw a box alone, there is no way of knowing what it contains, and as a result, there is no way to know what it weighs. But, have a character interact with that box, and anyone looking at the pose can, and will, immediately make a judgement about it's weight. We can't help it. We automatically empathize with a character because we know what it feels like to lift something heavy. We aren't actually seeing weight, what we're seeing is a character's reaction to that weight. It's like watching the wind blow through the trees. You don't see the wind, you see the leaves moving as a reaction to the wind. We don't see the weight, we see the reaction to the weight.

It works here too. 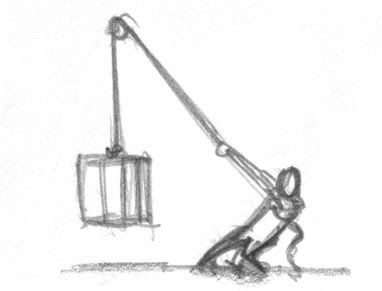 Here the character has used a pulley to haul the box off the ground. Gravity is pulling the box directly downwards, creating tension on the rope, and in turn, pulling the character to the left. The character fights it by throwing his body weight out to the right, equalizing the pull of gravity.

Get two characters into the game and they can balance each other off. Take a look at these:

Now imagine removing one of these characters from the pose, and see if the other will look like he can stay upright on his own. Each character is relying on the weight of the other for counter balance. It's nice to have friends isn't it?

All of this is really just about keeping the weight centred over the feet, or moving it out of centre to counter balance another weight. The concept seems very basic, yet it constantly eludes people that are learning to draw.

(or tight rough, or tie down)

A clean rough is a rough drawing that has been completely fleshed out without being cleaned up on a separate sheet of paper. This is usually done when the animator is satisfied with the action of the scene, and is ready to pass the scene off to an assistant or cleanup artist. It serves the purpose of providing definite, clear, on model keys to the assisting and ensures the preservation of the qualities of the rough in the final cleaned up drawings.

Open these two drawings in a separate window and flip between them so you can see how closely related the rough is to the tied down version. 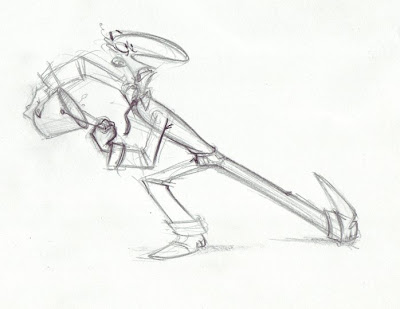 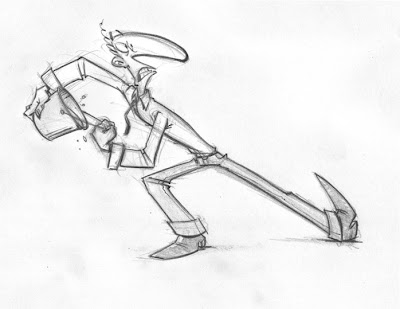 By maintaining the line work and construction of the rough while combining it with the final line of the finished drawing, you can show how you intend your drawings to be cleaned up. Now when the clean up artist has to deal with a drawing that hasn't been tightened up, they can use the tight rough as a guide for how to translate the rough structure into solid cleanups. It's a way to tell everyone that has to deal with your drawings what you really mean by your roughs. It's also your last chance to correct anything that hasn't been dealt with yet. Volumes, eye direction, structure problems... anything that needs to be pushed or clarified do it now, because if it doesn't get dealt with now, it won't be fixed down the line.